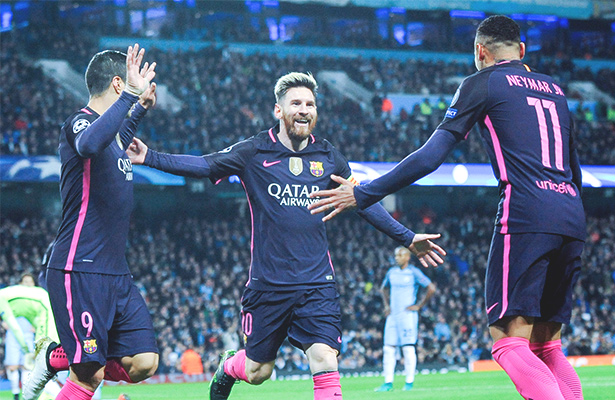 When it comes to club soccer, there is no bigger competition than the UEFA Champions League (UCL). Each year, 32 of the best teams around Europe compete in the tournament to try and win the Champions League trophy.

The first UCL tournament began in 1955, which Real Madrid were crowned the champions of. Throughout the years, and many tournaments, there have been dominant performances, incredible upsets and memorable moments that soccer fans will remember forever.

As you would expect, there have also been some astonishing goals scored in the Champions League. From amazing solo goals, to spectacular team goals to wonder-strikes the UCL has seen it all. Let’s take a look at the top 10 best Champions League goals of all time.

Starting off our list of 10 best Champions League goals ever, is Cristiano Ronaldo. Considering he is the Champions League top scorer of all time, you can expect him to appear here. From 39.6 yards out, Cristiano strikes the ball so hard, it travels 64.2mph… talk about power. There’s almost no chance any keeper would have been able to stop this shot.

There was always going to be a free-kick somewhere in this list, and here we have it. When it comes to free-kicks there are not many players that can strike the ball like Juninho. Considered to be the best ever free-kick taker in soccer history, Juninho scored this absolute thunderbolt just 5 minutes into the game and put Lyon in the lead. Ferocious.

At number 8, we have a goal that all Arsenal fans will remember forever. Arguably their greatest player of all time, Thierry Henry scored a fantastic solo goal. Up against a strong Real Madrid side, Henry collected the ball just near the half-way line and decided to do it all on his own. He dribbled past four defenders, all of which were trying their best to hack him down, and slotted the ball into the fair side of the net.

A name you’ve been waiting to see on this list is Lionel Messi, and here he is with the sixth best Champions League goal of all time. In true Messi, here is a goal that features both impeccable footwork and a fantastic finish. Rakitic plays a wonderful through ball to Messi, who then proceeds to dance his way past Boateng before chipping Neuer to score his second goal of the game. Barcelona went on to win the game 3-0.

Next up, we have one of the many over-head kicks that we will see in this list of best UCL goals. Not only does this goal feature some superb two-touch build-up play, it also includes a magical acrobatic finish from Mandzukic. It’s even more impressive when you realize this happened on the biggest stage of all: the Champions League Final. Although this goal brought Juventus level with Real Madrid at 1-1, they would go on to lose 4-1.

The quarter-final between Inter Milan and Schalke in 2011, is one to remember. That’s mainly down to Dejan Stankovic’s wonder goal. Manuel Neuer clears the ball away from his goal with a huge diving-header, only for it to be met by a sweet-strike from Stankovic at the half-way line. The ball glided over the defense and goalkeeper before soaring into the back of the net. A perfectly executed volley.

Lionel is back with another fantastic goal. Against Barcelona’s biggest opponent, Real Madrid, he picks up the ball just past the half-way line and carries it past 5 defenders before slotting the ball in the back of the net. A classic Messi goal.

Starting of the top 3 greatest UCL goals of all time is Cristiano Ronaldo. During the 2017/18 UCL quarter-finals, Ronaldo scored his second goal against Juventus in spectacular fashion. As the ball was crossed in from the right-hand side of the box, Ronaldo found himself with his back towards goal. Whilst most players wouldn’t know what to do in this position, of course Ronaldo did; he went for the extraordinary. He leapt into the air and scored a sensational over-head kick, leaving Buffon left bewildered. It was a goal so special, that even the Juventus supporters were applauding.

In the 2002 Champions League final, we witnessed what could be the most iconic UCL goal of all time. As the ball was hoofed into the air, Zidane found himself on the edge of the opposition’s box. With his eyes on the ball the whole time it fell, he struck the ball as cleanly as possible, curling it right into the top corner of the goal.

This could arguably be the best soccer goal ever. Just one month after CR7’s over-head kick, we were blessed with a goal almost-identical, this time from his team-mate Gareth Bale. In the 62nd minute of the 2017/18 Champions League Final, the game was tied at 1-1. Marcelo crossed in the ball, and just when it looked like nothing was going to come of it, out of nowhere came Gareth Bale. With his back towards the goal, he jumped and performed an incredible over-head kick sending the ball into the top left corner, giving Real Madrid a 2-1 lead. Soccer fans around the world could not believe what they had just seen; pure magic. Madrid went on to win the game 3-1 and were crowned the 2018 Champions of Europe.