The NFL playoffs are here, and so are our power rankings – giving you the freshest look at who has the best chance to be the Super Bowl winner next month.

We won’t see the Chiefs and the Packers in action this weekend, as they hold the top two spots and get a bye.

But the hottest team in the league is on tap and we’ll see what they can do – Buffalo is on fire, and they’re showing no sign of slowing down.

On the other end, both Chicago and Washington limped into the postseason, but they have hit hot streaks this season and could surprise some teams – especially Washington with their tough defense, led by Chase Young.

Now that the playoffs are set, who’s your pick to go all the way to Tampa Bay?

#1 – The Kansas City Chiefs (15-1) +190
With a first-round bye, the Chiefs can sit back and work on… ok, so there’s not a lot to work on. Patrick Mahomes is playing close to his peak and Travis Kelce is setting records as a tight end. They did cruise a little in some games, but expect them to play a full 60 minutes now that the playoffs are here.

#2 – Green Bay Packers (13-3) +450
Aaron Rodgers looks to be a lock for the MVP this season, and he and Davante Adams have the best connection of any QB-WR duo in the league. The Packers don’t have many holes, and Aaron Jones is a top-5 running back. If the defense plays well, watch out league.

#3 – Buffalo Bills  (13-3) +650
Everyone’s bullish on the Bills heading into the playoffs, and for good reason. Stefon Diggs is possibly the best WR in the league, and Josh Allen seems to have erased his mental mistakes as he completes his 3rd NFL season. Watch for the Bills to go far, especially in the cold confines of their home field.

#4 – New Orleans Saints (12-4) +800
Because they’re facing the up-and-down Chicago Bears, the Saints are the biggest favorite of all the teams heading into Wild Card weekend. They’ve got the playoff experience with Drew Brees, but watch out for their defense too – they only gave up 21 points per game during the season, and they ended the year with 5-interception blowout win.

#5 – Tampa Bay Buccaneers (11-5) +1000
It’s what they signed him for. Tom Brady, in his first-ever playoff appearance for a team other than the Patriots, is still dangerous. But he can’t quite handle the pass rush like he used to, and that is Washington’s specialty. Look for the Bucs to be in tough against a scrappy Football Team.

#6 – Baltimore Ravens (11-5) +1100
The Ravens are arguably the hottest team heading into the NFL playoffs. Running is key come playoff time, and with 400+ yards rushing in their final game alone (ok, it was against the Bengals), Baltimore’s looking like a strong contender. Don’t discount the revenge factor either – Lamar & Co. want to get over last year’s loss to Tennessee.

#7 – Seattle Seahawks (12-4) +1100
Perennial playoff players, the Seahawks enter this year with Russell Wilson looking like he’s lost a step. They had the highest-scoring offense over the first 9 weeks of the season, but they’re only 16th since then. And getting back to putting up numbers will be even more of a challenge when Aaron Donald rolls his Rams into town this weekend.

#8– Pittsburgh Steelers (12-4) +2000
Which Pittsburgh team will show up in the postseason? The unbeaten one that scorched the league over their first 11 games? Or the suddenly sad Steelers, losers of 4 out of their last 5 games? Either way, team MVP and NFL sack leader T.J. Watt will be looking to rattle Baker and the Browns this weekend.

#9 – Tennessee Titans (11-5) +3000
Their best shot at going far is in a shootout. With a shaky defense, the Titans need to rack up points. And they’ve got the tools to do it, with Derrick Henry staying in beast mode as he rushed for over 2,000 yards. Ryan Tannehill has proved he can be a top QB too. These are some decent long odds if you’re looking for a sleeper pick.

#10 – Los Angeles Rams (10-6) +4000
Aaron Donald showed again why he’s the best defensive player in the league in the final weekend, with a monster game against the Cardinals. Is the Rams’ D strong enough to make up for their injured starting QB Jared Goff, who’s out for a while? Or does Russell Wilson have some savvy veteran tricks up his sleeve? 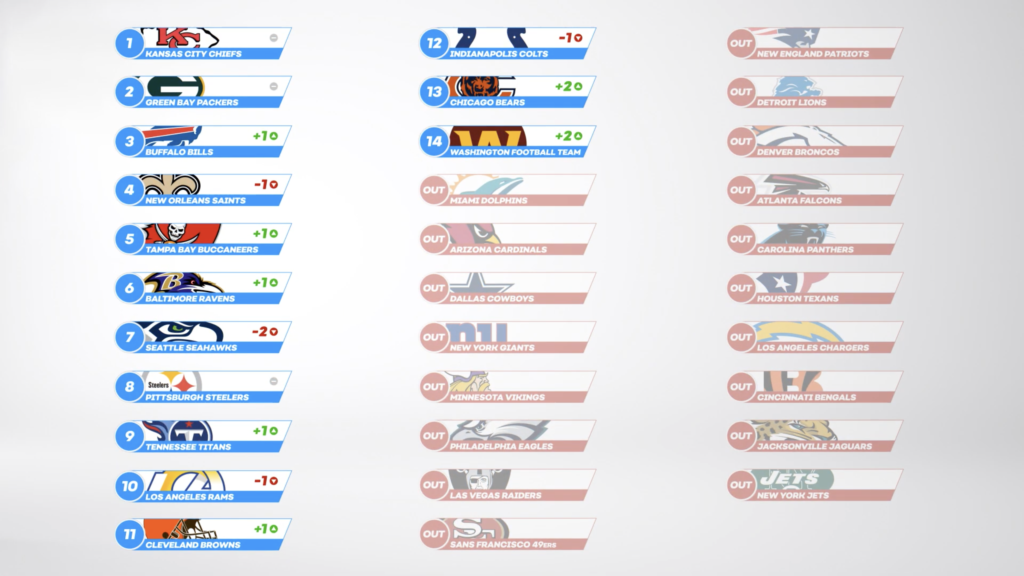 #11 – Cleveland Browns (11-5) +5000
Like their first-round opponent Pittsburgh, Cleveland is like a box of chocolates – you never know what you’re gonna get, week to week. But if RB Nick Chubb gets rolling, the Browns could steal a win in Steeltown.

#12 – Indianapolis Colts (11-5) +5000
They’re in tough against the red-hot Bills this weekend. They also blew a big lead against Pittsburgh two weeks ago, and had a tough time putting away the Jaguars in their final game. Look for them to lean heavily on RB Jonathan Taylor.

#13 – Chicago Bears (8-8) +8000
Tru-believers had a tough time in the final game of the season, with QB Mitch Trubisky having trouble getting the offense going against the Packers. They’ll need to rely on top RB David Montgomery if they want to have a chance to beat the Saints this weekend. As for their Super Bowl odds, you’d have to be a very true believer…

#14 – Washington Football Team (7-9) +8500
Chase Young was 1 year old when Tom Brady started his NFL career. Can the young gun get to the old vet enough to make a difference in Brady’s first Wild Card game as a Buccaneer? Washington will need to dig deep, but you can never count out a strong defense.

We’ll get our fill of football with two triple-headers this weekend, under the league’s new Super Wild Card playoff format. With Lamar looking strong, Brady still slinging it, and even Baker getting going, there’s going to be plenty of action for everyone.

So get settled into the couch, check out all the games and make your picks today at Bovada!