The league is hitting its stride after two weeks and many teams look like they’re already in mid-season form. But key injuries might impact several teams’ fortunes.

We saw the Los Angeles Rams take a big leap in our list after Week 2, and the Arizona Cardinals might be for real too.

How does this translate into every team’s chances of winning Super Bowl 55? Let’s check out Bovada’s Power Rankings for Week 3, along with the odds for every NFL team.

#1 – Baltimore Ravens (2-0) +450
The Ravens take over the top spot after another dominant game on both sides of the ball.

#3 – Seattle Seahawks (2-0) +900
They shaved 600 points from last week’s odds, mainly because Russell Wilson is already looking like the MVP.

#4 – New Orleans Saints (1-1) +1000
After a Monday night loss to the Raiders, the Saints slipped from the top 3 and will miss WR Michael Thomas for several weeks. 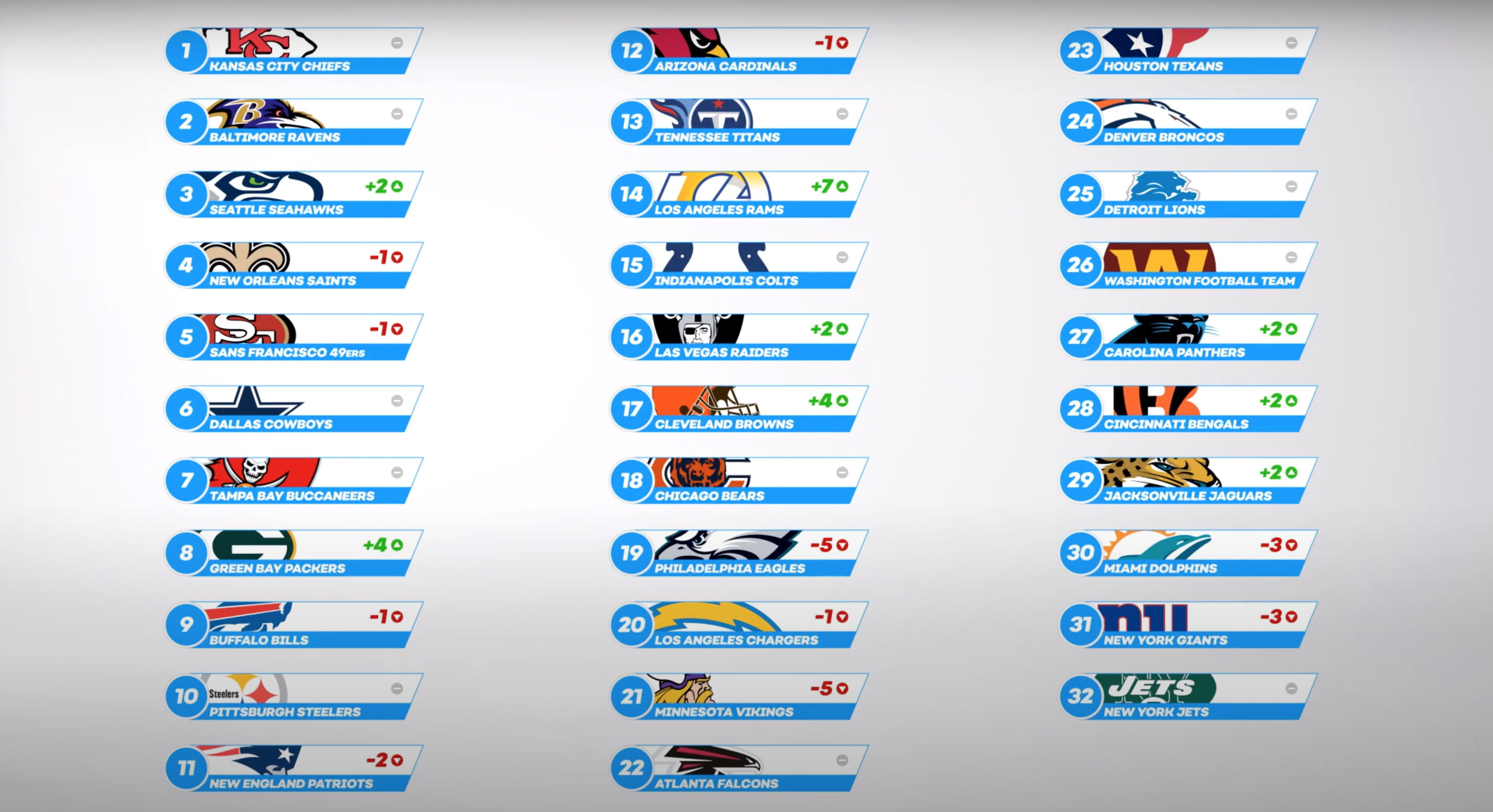 #12 – Arizona Cardinals (2-0) +2200
Another strong performance by sophomore QB Kyler Murray and the Cards might crack the top 10 soon.

#13 – Tennessee Titans (2-0) +2400
The undefeated Titans face a Minnesota team that can’t seem to get it together. Could Tennessee be a contender?

#16 –  Las Vegas Raiders (2-0) +4000
Impressive Monday Night Football win moves them up 4 spots in our Power Rankings. Are they worth the gamble to go all the way?

#17 – Cleveland Browns (1-1) +4500
Big movers this week, the Browns are looking to keep it rolling. Have Baker and OBJ finally hit their groove?

#21 – Minnesota Vikings (0-2) +6600
Slipping each week since the preseason power rankings, the Vikes might be in tough against Tannehill’s Tennessee.

#22 – Atlanta Falcons (0-2) +8000
Heartbreak city last weekend for the Falcons, who have the talent to move up the power rankings, but they need to do it ASAP.

#23 – Houston Texans (0-2) +10000
Deshaun Watson’s team is facing an uphill team against pumped-up Pittsburgh. Can they salvage their season in Steeltown?

#27 – Carolina Panthers (0-2) +20000
Carolina lost Christian McCaffrey for the next month. Can they get back on the prowl somehow against the Chargers?

#29 – Jacksonville Jaguars (1-1) +20000
Despite Gardner Minshew’s performances, oddsmakers are not giving the Jags much of a shot. Can they ever move up the rankings?

Only five teams in NFL history have made the playoffs after starting the season 0-3, so this is a pivotal weekend for all the teams looking for their first win of the season in Week 3.

And just like every week of the 2020 NFL season, Bovada’s Power Rankings will show you which teams might just get it done.