Our power rankings give you the best insights for picking the eventual winner of Super Bowl 55.

This week, the slowdown in Steeltown continues, with Pittsburgh sliding down and almost out of the Top 10. Can they turn things around in time?

We also saw some vintage wide receivers make their mark, as Antonio Brown and Dez Bryant arrived on the scene in style – can they be the ones to put their teams over the top?

Check out all the info below and get ready for two more weeks of intense action as we head into the playoffs.

#1 – The Kansas City Chiefs (13-1) +170
No real signs of slowing down, but KC can take some quarters off. They’ll need to play 60 minutes in every playoff game to reach the Super Bowl.

#2 – Green Bay Packers (11-3) +550
Come playoff time, the offense can’t sputter like it did against the Panthers last weekend. But they still won, and Aaron Jones is still an elite RB.

#3 – New Orleans Saints (10-4) +800
Drew Brees blew back into town after his rib injury, but the Saints will need their D to step up if they want a real shot at the Lombardi Trophy.

#4 – Buffalo Bills (11-3) +900
The Bills clinched the AFC East for the first time in 25 years, and Josh Allen is in the MVP conversation. No one’s hotter than the Bills right now.

#6 – Tampa Bay Buccaneers (9-5) +1300
Antonio Brown scored his first TD for the Bucs last weekend. If he gets rolling, TB and TB12 will be tough to contain in January.

#8 – Baltimore Ravens (9-5) +1500
Like AB in TB, Dez Bryant scored his first TD in years – he might help give Lamar Jackson another weapon in tough playoff matchups.

#9– Pittsburgh Steelers (11-3) +2000
Ok, no one expected a perfect season. But losing three straight, including the most recent loss to the Bengals, is not a great sign for Steeltown. 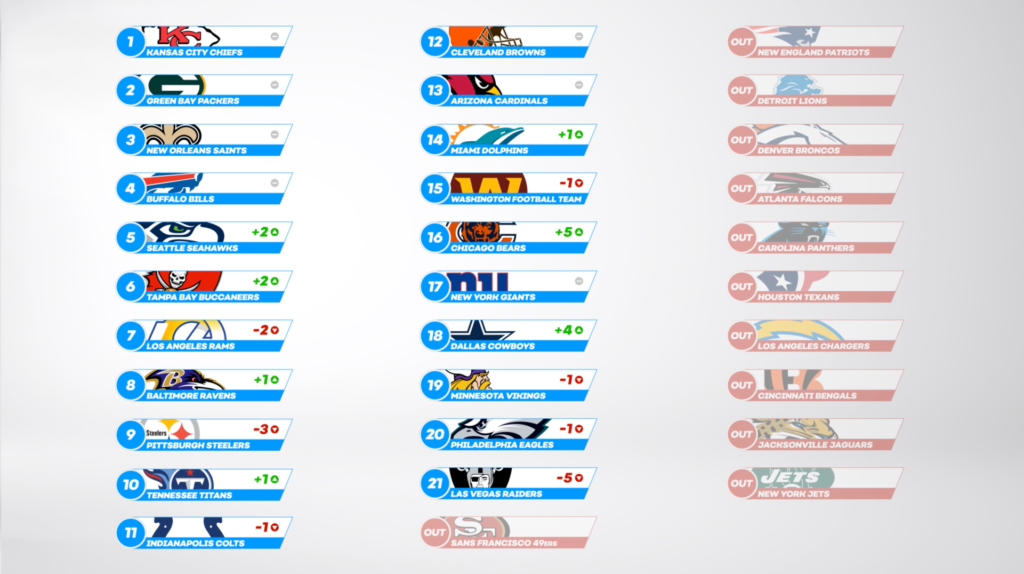 #11 – Indianapolis Colts (10-4) +2500
It took a late-game fumble to beat the Texans last weekend, but the Colts did get closer to the playoffs. Oddsmakers seem to think they’re still a decent pick to go deep.

#14 – Miami Dolphins (9-5) +8000
With the Raiders up next and then a Bills matchup that might mean nothing for Buffalo, the Fins can still win their way in.

#15 – Washington Football Team (6-8) +8000
According to the stat geeks, Washington has a 60% chance to win the NFC East, higher than any other team in the division. Come playoff time, it’s anybody’s game.

#16 – Chicago Bears (7-7) +20000
Going from a hot start to a cold streak, the Bears are still showing signs of life. RB David Montgomery is leading the charge.

#20 – Philadelphia Eagles (4-9-1) +25000
Hurts to think where Philly might be if Jalen was named the starter a few weeks earlier. Still, they could make something happen over the next two weeks.

#21 – Las Vegas Raiders (7-7) +50000
It’s fitting that the longest odds for teams still in the hunt are with Vegas. Depending on your source, the Raiders have either a 2% chance or less than 1% chance to hit the postseason.

Still want to lay down some action on a team with long odds? Kyler Murray and the Cardinals can explode on any given weekend, and the Colts are a team with a strong D and a savvy QB.

Meanwhile, oddsmakers still like the looks of Kansas City in the AFC and Green Bay in the NFC as the Super Bowl gets closer.