The Bovada Power Rankings give you the odds for the potential winner of Super Bowl 55, and as we head into Week 12 things are getting a little clearer.

The Kansas City Chiefs still look like the team to beat, but this season has shown that anybody can be beat (except maybe Pittsburgh).

There’s still room to move in the rankings for teams like Indianapolis, who looked good against a tough Green Bay squad.

Still counting on a dark horse? The power rankings let you know who you should consider.

#1 – The Kansas City Chiefs (9-1) +275
Patrick Mahomes just showed again why he’s the front-runner for MVP, and why the Chiefs are still the favorites to take home the Super Bowl hardware.

#2– Pittsburgh Steelers (10-0) +500
The Steelers’ defense leads the league in sacks and hurries. They’re in for a challenge as they try to rattle Lamar Jackson this week.

#3 – New Orleans Saints (8-2) +550
Taysom Hill looked like Drew Brees but with serious wheels. Can he keep the QB position warm till Brees returns to action?

#4 – Seattle Seahawks (7-3) +1100
A tough win over division-rival Arizona last weekend puts the Seahawks in good position to take the NFC West, at least.

#5 – Tampa Bay Buccaneers (7-4) +1100
Some mistakes by Tom Brady cost the Bucs in the rankings this week. Come playoff time, will he be able to summon his GOAT days, or has he aged too much?

#7 – Los Angeles Rams (7-3) +1200
The Rams’ QB has been on-again, off-again all season long. But he was definitely on a roll in their Monday night against the Bucs.

#9 – Baltimore Ravens (6-4) +2000
Following a loss, Baltimore has the Steelers up next. And with a number of Covid-related stoppages this week, the Ravens might be grounded.

#10 – Buffalo Bills  (7-3) +2500
Coming off a bye week, Buffalo faces Justin Herbert and the Chargers at home. Maybe the cold weather will cool off the red-hot QB. 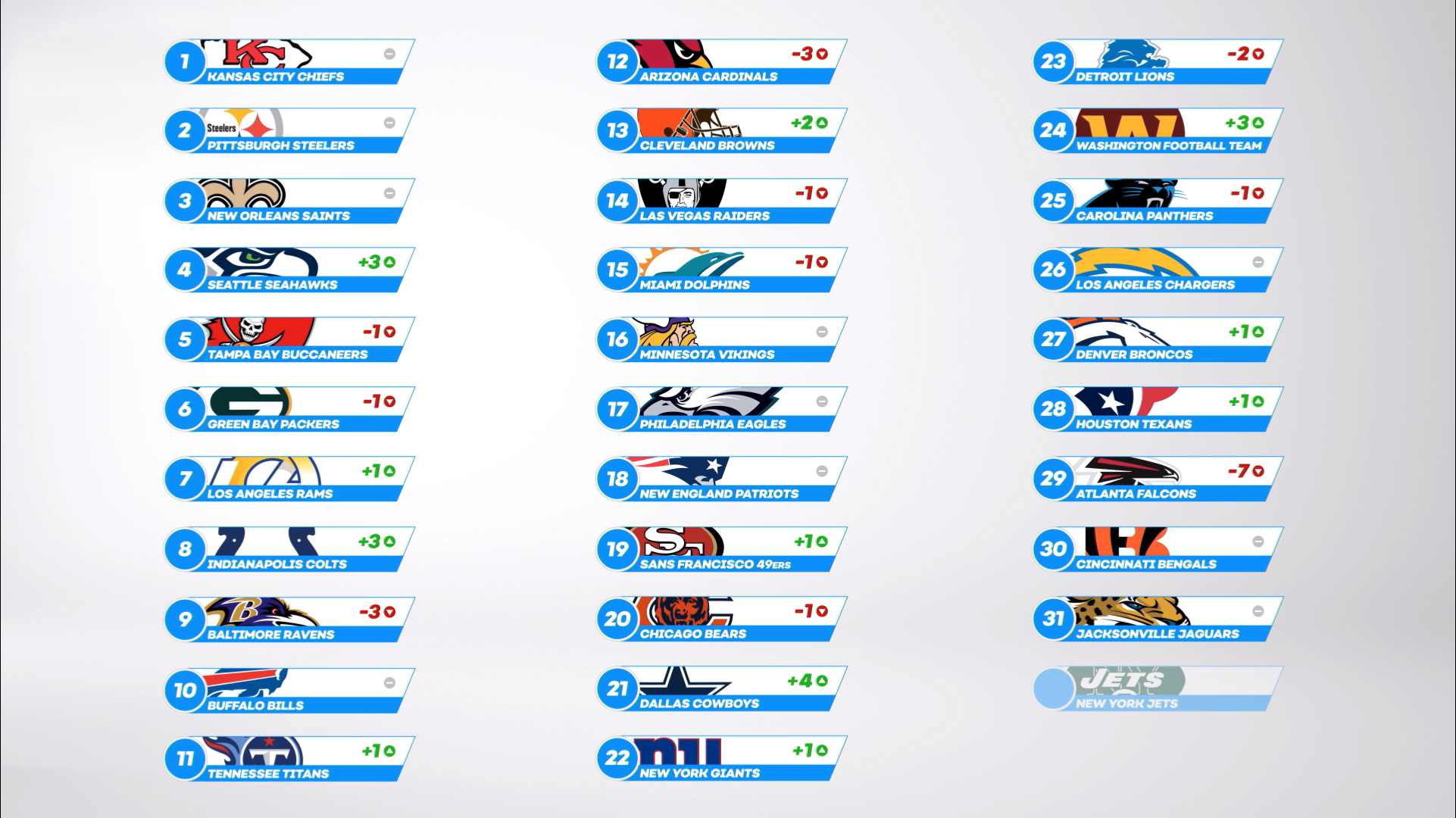 An OT win over the Ravens might have saved the Titans’ season, and Derrick Henry can carry the load well into the NFL playoffs

#12 – Arizona Cardinals (6-4) +3300
The present, Kyler Murray, meets the past, Cam Newton this weekend. A win puts the Cards in good position to reach the playoffs.

#13 – Cleveland Browns (7-3) +5000
The oddsmakers are probably as surprised as everyone that Cleveland is 7-3. Do they have the talent to climb even in the power rankings?

#16 – Minnesota Vikings (4-6) +10000
A tough loss to the Cowboys puts a dent in their postseason plans, but with mega-star Dalvin Cook they’re not out of it yet.

#19 – San Francisco 49ers (4-6) +12500
Is a comeback in the cards? The Niners are coming off a bye, so they’re slightly healthier but still hurting from too many injuries overall.

#20 – New York Giants (3-7) +15000
Does anyone actually want to win the NFC East? The Giants have as good a shot as anyone, with two straight W’s against division rivals and the beatable Bengals up next.

#22 – Dallas Cowboys (3-7) +15000
The Cowboys showed some resilience in a win over the Vikings this weekend, including Zeke’s first 100-yard game all season. Signs of hope?

#24 – Washington Football Team (3-7) +25000
Alex Smith just got his first win since his devastating injury two years ago, and Washington has a legit shot at taking the NFC East.

#26 – Los Angeles Chargers (3-7) +30000
Justin Herbert keeps raising the bar, and the Chargers’ future looks brighter than this hard-luck season has turned out.

#27 – Denver Broncos (4-6) +40000
Denver’s D just had six sacks against the Dolphins, and can make life difficult for any QB. Let’s see how they do against Taysom Hill this weekend.

#28 – Houston Texans (3-7) +40000
The Texans look like a team that has given up, but with a national stage on Thursday there’s still pride on the line for J.J and Deshaun.

#29 – Atlanta Falcons (3-7) +50000
Matt Ryan just got sacked 8 times against the Saints, and their playoff chances might have gotten sacked along with him.

#31 – Jacksonville Jaguars (1-9) +200000
Mathematically still alive, maybe – but the Jags are looking to next season and a potential Trevor Lawrence pick.

The road to Super Bowl is narrowing, but there’s still plenty to be decided. Watch for veteran experience in players like Aaron Rodgers and Russell Wilson to lead their teams as the temperature drops and the pressure rises.