The Bovada Power Rankings let you know which teams have the best shot at winning Super Bowl 55, and things just got even more interesting heading into Week 10.

The elite teams took some big hits this past weekend, with Tampa Bay and Seattle losing, while the Chiefs and the Steelers barely beat some weaker squads.

Let’s take a look at where each team sits in the rankings.

#1 – The Kansas City Chiefs (8-1) +333
The Chiefs were in tight against the Panthers last weekend, but being second in the NFL for passing and total points helps get you out of a jam every time.

#2– Pittsburgh Steelers (8-0) +500
Pittsburgh survived a scare against Dallas to remain undefeated. Expect them to refocus, but Big Ben and at least 3 others are now on the Covid list.

#3 – New Orleans Saints (6-2) +700
A big win last weekend over Tampa means the Saints are the biggest movers in the power rankings this week.

#4 – Baltimore Ravens (6-2) +850
Is the return of Dez Bryant to the NFL enough to shore up their awful passing offense? The Ravens’ Super Bowl hopes might depend on it.

#5 – Tampa Bay Buccaneers (6-3) +850
What happened to the Bucs? Last weekend’s loss to the Saints was the worst loss of Tom Brady’s career. He’ll be looking for revenge.

#6 – Seattle Seahawks (6-2) +900
A setback for Seattle last weekend shouldn’t derail them – out of their 8 remaining games, the Rams are the only ones with a winning record.

#7 – Green Bay Packers (6-2) +950
The Packers have one of the easiest paths remaining to the postseason. So long as Aaron Rodgers stays healthy, they could be in great shape.

#8 – Buffalo Bills  (7-2) +1600
Hanging 44 on the Seahawks is a great way to improve your team’s chances of making it to the Super Bowl. Can Josh Allen keep up the consistency?

#9 – Tennessee Titans (6-2) +2200
They came out hot, but the Titans have cooled with 2 losses in their last 3 games. Watch for Derrick Henry to shoulder more of the load in the race for the playoffs.

#10 – Los Angeles Rams (5-3) +2500
The Rams face both the Seahawks and the Cardinals twice over their remaining games. Which Jared Goff will show up for those tough matchups? 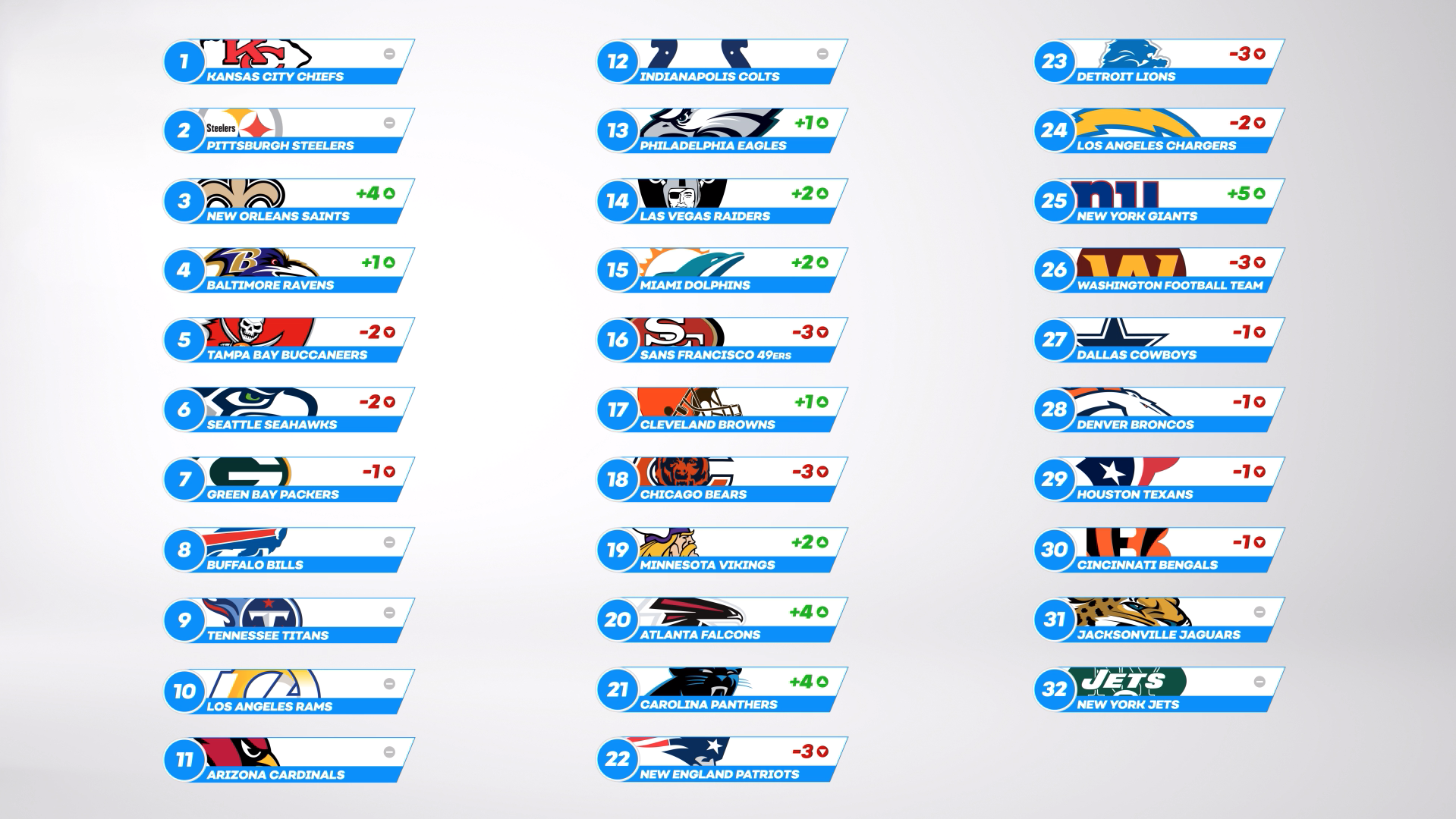 #16 – San Francisco 49ers (4-5) +6600
Crazy stat: last weekend the Niners had over $80 million in cap space sitting injured on the sidelines. Injuries have decimated the team but they still have a shot.

#17 – Cleveland Browns (5-3) +7000
Perfect timing for their bye week, as the Browns have some key people injured and on the Covid list. Can they make a second half push this season?

#18 – Chicago Bears (5-4) +7500
With 3 straight losses, Chicago’s slipping in the power rankings. Khalil Mack is still a huge factor on D, but it’s their offense that needs to step up.

#23 – Detroit Lions (3-5) +17500
The Lions run defense just got mauled by Dalvin Cook last weekend – they’ll need to do better, but they do have a relatively soft sked for the next 3 weeks.

#25 – New York Giants (2-7) +20000
It seems the Giants are getting tougher by the week. But they’re second-worst in points scored per game – they’ll need to find the end zone more often.

#26 – Washington Football Team (2-6) +20000
Alex Smith’s return is nothing short of heroic. Will it be enough to propel Washington to the top of the wide-open NFC East and beyond?

#28 – Denver Broncos (3-5) +25000
The up-and-down Broncos need to string some wins together to have a shot at escaping the tough AFC West. Tough sked ahead too.

#29 – Houston Texans (2-6) +25000
Will Fuller and J.J. Watt avoided being traded – let’s see if that translates into some momentum for the struggling Texans.

Heading to Lambeau might not be what the Jaguars need, but they can play some decent defense.

The Jets came close to beating the Patriots last weekend, but they remain the only team without a win this season.

Did we see a glimpse of the future in the Arizona vs. Miami game last weekend, where Tua and Kyler battled it out? Both these teams could still surprise a lot of opponents with these budding superstars taking over games.

The oddsmakers know it’s still anybody’s game when the Lombardi Trophy arrives in Tampa in February. Who’s your pick?