After a solid Wild Card Weekend, the Divisional Playoff round promises to be even better.

It’s a weekend where all the star QB’s are set to shine, with the old vets like Tom Brady, Drew Brees, and Aaron Rodgers still running the show, while young superstars like Josh Allen, Lamar Jackson and even Baker Mayfield are the ones who will carry the torch for the years to come.

The Chiefs are healthy and rested heading into their first playoff matchup of the season. Can Mahomes and Hill and Kelce keep up their magic against a scrappy Browns defense? Also, the Chiefs’ D, never their strongest asset, will have to make sure the Browns don’t rush out to a 28-point lead like they did last weekend. KC was only 16th overall in team defense in 2020, and only 22nd against the run – bad news when Nick Chubb rolls into town.

Aaron Rodgers is always the main headline when it comes to the Packers’ chances in the postseason. While teams try (and often fail) to focus on his favorite target, WR Davante Adams, watch for TE Robert Tonyan to play a factor in the cold weather. The only question mark is if Green Bay’s weak rush defense can stop hot LA running back Cam Akers.

The Josh Allen Experience has gone from a joke to a seriously good ride to be on for Bills fans, with Allen again having a strong game last weekend. Last time the teams met, in 2019, the Bills held Lamar Jackson to his lowest yardage of the season. Meanwhile, WR Stefon Diggs is still the Bills’ most potent weapon and Buffalo’s all-pro safety Micah Hyde might be one to watch – if anyone in the league can hang with Jackson, it’s him.

New Orleans finally has a fully healthy Michael Thomas and Alvin Kamara, which could make the difference. But Brees looks banged up (with busted ribs this past season, it makes sense). This is not entirely the same Saints team that beat up the Bucs twice this season – they looked a little flat against Chicago in the Wild Card matchup, and they can’t afford the same against Brady, Gronk and company.

It’s Brees vs Brady for the first time in the playoffs. The Saints beat the Bucs easily twice this year, but lately you can give the edge to TB12 – he’s putting up numbers that rival his days with the Patriots, and the Bucs have won 5 straight games. The teams’ defenses gave up 21 and 22 points per game this season, so there’s not much daylight between them. It’ll come down to which 40-something QB has more gas in the tank.

Baltimore’s defense could be the missing element here – they only gave up a total of 209 yards last weekend. If they stay tough on defense and Lamar runs wild, they’ll put up a tough fight against Buffalo. Meanwhile WR Marquise Brown is one of the most underrated players in the league, and with another 100+ yard game he could open things up for Jackson’s long runs.

LA shocked a lot of fans last weekend by dismissing the Seahawks pretty easily. It’s the Rams D that creates opportunities, and a strong defense can take a team far in the postseason. Aaron Donald is a one-man wrecking crew, and he could make things tough for a depleted Packers’ O-line if he’s healthy enough. But it’s January in Green Bay – where Aaron Rodgers heats up and it’s a long way from sunny Los Angeles.

With their first playoff win in 26(!) years, the Browns’ spanking of the Steelers last weekend must have Cleveland believing in itself more than ever. RB Nick Chubb just eats yards, and his 1-2 punch with Kareem Hunt can do real damage to a defense over four quarters. If Baker Mayfield can stay consistent, you never know… 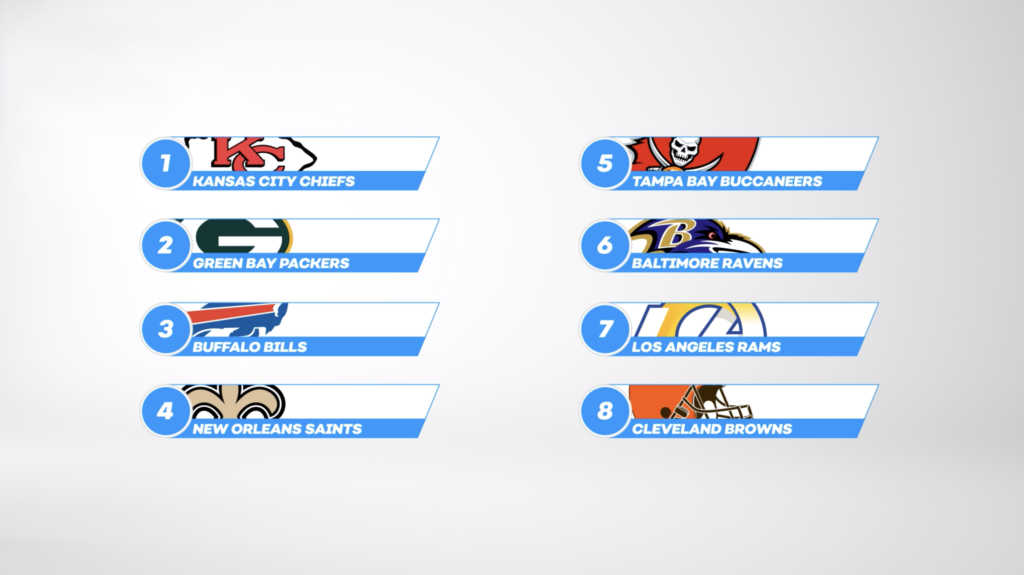 If you’re playing the safe game, you’ll be aiming for a Kansas City vs Green Bay Super Bowl in a few weeks.

But if you’re looking to cash in on an upset, long-shot Cleveland will be the team that shocks the world if they manage to beat the Chiefs, but they do match up well against them.

So grab that popcorn as the games move into primetime, and make your picks today at Bovada!