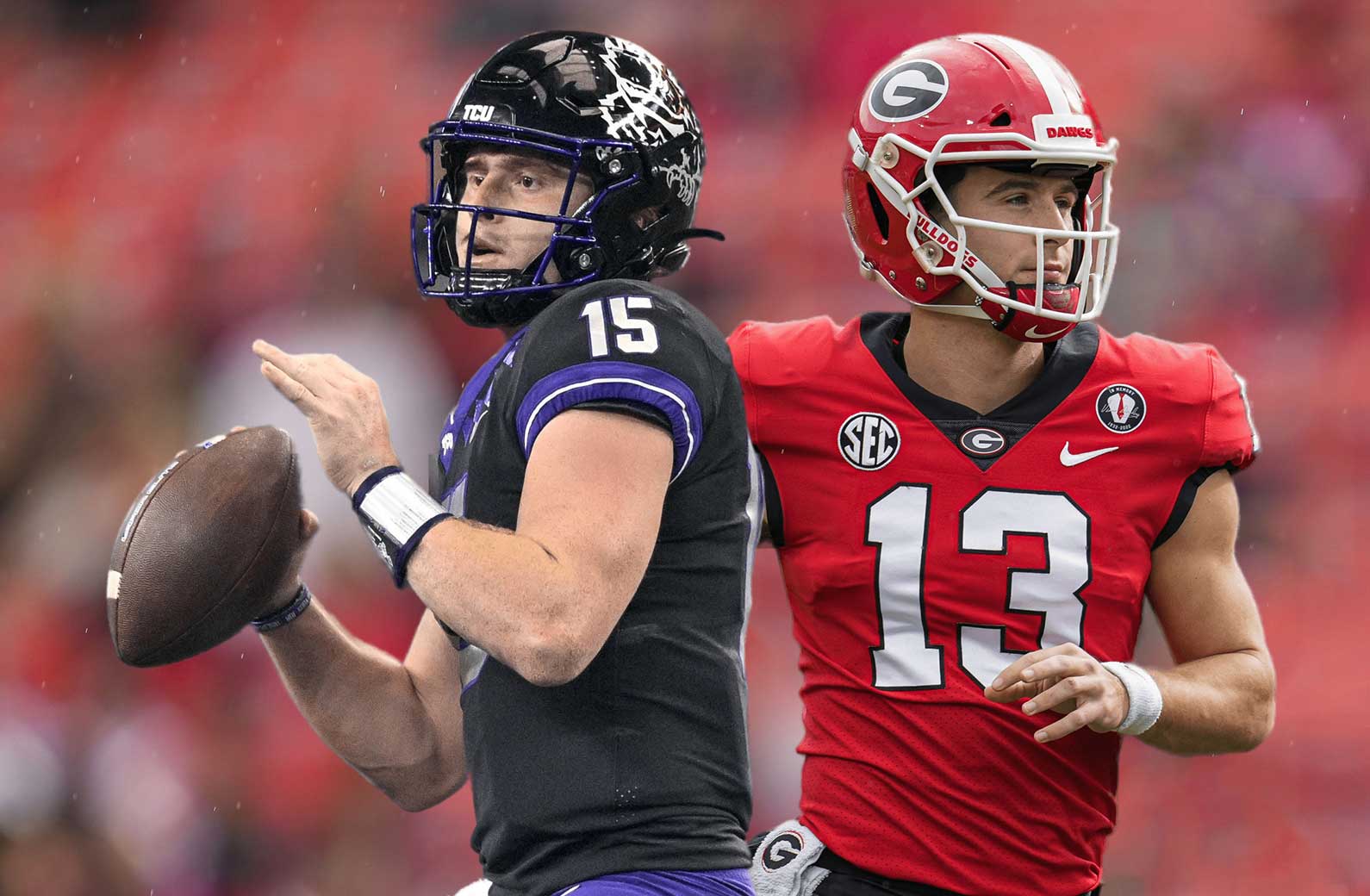 There’s a ton of hype surrounding this title game, as it comes on the heels of two incredible semi-final matchups. As the defending national champions, Georgia looks to become the first team in a decade to win back-to-back national titles. TCU, on the other hand, is looking to win their first national championship since 1938 and bring this program the respect it deserves.

As we prepare for the final game of the college football season, let’s take a closer look at both the Georgia Bulldogs and TCU Horned Frogs. This article will look at how both teams reached the 2023 National Championship Game, as well as how they stack up versus one another on the field. Keep reading for some extra insights and betting tips leading up to game day and cash in on all the NCAAF action at Bovada Sportsbook.

The Bulldogs are looking to cap off a remarkable campaign that saw them go undefeated throughout the regular season and clinch a spot in this year’s College Football Playoff with a dominant victory over LSU in the SEC Championship Game. With Heisman Trophy candidate Stetson Bennett at quarterback and a defense giving up a paltry 12.8 points per game, Georgia has looked like the best team in the nation throughout most of the season.

The Bulldogs have also shown the ability to overcome adversity, made evident by their thrilling 42-41 come-from-behind win over Ohio State in last week’s College Football Playoff semi-final. Despite trailing by 14 points in the fourth quarter, Georgia was able to put together some clutch scoring drives and defeated Ohio State with a game-winning touchdown in the final minute of play. Now 14-0 and just one win away from back-to-back titles, it’s clear to see why Georgia is such a massive betting favorite heading into the title game on January 9.

Seeking to make the most out of their first-ever appearance in the College Football Playoffs, TCU will attempt to pull off a major upset by defeating Georgia and winning college football’s National Championship. In the team’s first year under head coach Sonny Dykes, the Horned Frogs enjoyed one of their best seasons in the program’s 126-year history. TCU was a perfect 12-0 before losing to Kansas State in overtime in the Big 12 title game, but even that loss wasn’t enough to keep this offensive juggernaut out of the College Football Playoffs.

TCU still had their fair share of doubters leading up to their semi-final matchup with Michigan, but answered their critics with an impressive 51-45 victory over the previously undefeated Wolverines. That Fiesta Bowl win improved their record to 13-1 and has this team within reach of the perfect ending to their surprising season. While the defense will need to be at their very best versus with Georgia, this team is built around a potent offensive attack led by another Heisman Trophy candidate in Bulldogs QB Max Duggan. The 21-year-old senior can hurt opponents with his arm or his legs and has plenty of offensive weapons to work with, including RB Kendre Miller (1,399 rushing yards, 17 TDs) and WR Quentin Johnston (1,066 receiving yards, 6 TDs).

Georgia is the clear betting favorite in this year’s title game, but the defending champs will have their work cut out for them in this matchup. The Horned Frogs own one of the most explosive offenses in all of college football and will look to pick apart the Bulldogs’ vaunted defense. Considering that Georgia just gave up 41 points to Ohio State, TCU could provide some solid betting value as 12.5-point underdogs.

If Duggan and the offense can get things going against Georgia’s stop unit, we could end up seeing one of the larger upsets in Championship Game history. On the other hand, if Georgia can complete their perfect season with one last win, they’ll become the first team in the College Football Playoff era to repeat as champions. Either way, we’ll see history being made when these two teams take the field for the 2023 National Championship Game.

So that you can bet on the National Championship Game, along with all your other favorite sporting events, be sure to sign up to Bovada today. Once you have an account created, make sure you claim your crypto sports welcome bonus to make the most out of your first deposit. Then, you are all set! Head on over to Bovada and enjoy online sports betting across all your favorite sports.