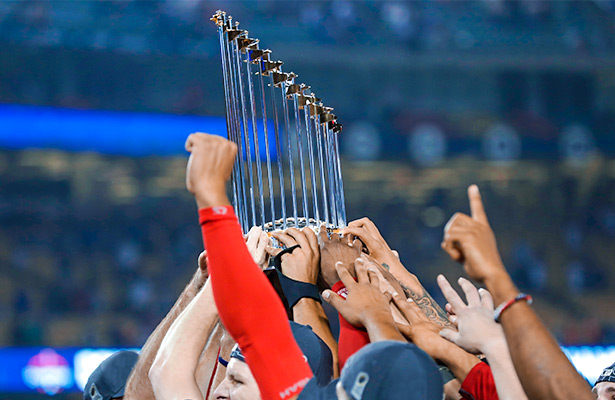 The Boston Red Sox capped off an historic season in winning style on Sunday night, posting a 5-1 victory over the Los Angeles Dodgers to claim their fourth World Series title in 14 years. But even before the celebration got underway in Boston, the Red Sox emerged as early +650 favorites to successfully defend their title on the 2019 World Series odds.

The Red Sox record book was rewritten during the 2018 campaign. Boston racked up the best mark in baseball with a franchise-record 108 wins while avoiding losing four straight all season.

The club also claimed a third straight division title for the first time in franchise history. Boston subsequently marched to convincing playoff series victories over two 100-win opponents, the New York Yankees and the Houston Astros, before denying the Dodgers a return to glory in their second straight World Series appearance.

With key players eligible to pursue free agency this winter, Red Sox management will be kept busy working to maintain the team’s championship core. Boston also faces some stiff competition on the odds to win 2019 World Series, with the Astros closing trailing at +700, just ahead of the Dodgers and Yankees at +800.

Winners of 21 of their final 27 outings, Houston’s 103-59 record was second only to the Red Sox. That positioned the Astros as World Series favorites entering the postseason, before they were dominated in a five-game series loss to Boston in the ALCS.

Dodgers Had Tough Road to the World Series

It proved to be a much more difficult road back to the Fall Classic for the Dodgers, who needed a tiebreaker win over the Colorado Rockies to secure a sixth straight NL West title.

After knocking off Atlanta in the NLDS in four games, Los Angeles needed seven games to get past the Milwaukee Brewers in the NLCS. The Dodgers managed to post their lone victory over the Red Sox in the longest game in World Series history, a 3-2 victory as -175 chalk in an 18-inning marathon in Game 3 that failed to turn the tide in the series.

The Dodgers also face a potential offseason of change, with several regulars eligible to test free agent waters, led by ace Clayton Kershaw and slugger Manny Machado. Los Angeles must also improve upon its 92-win total from this season if it wants to remain in the hunt for a seventh straight postseason berth in 2019.

Further down the MLB World Series odds, the Chicago Cubs lead the best of the rest at +1000, ahead of the Cleveland Indians at +1200, while the Braves join the Brewers at +1400. The Cubs posted a respectable 95 wins, but were forced to settle for second place behind a Brewers squad that stormed to the top of the NL Central during a season-ending eight-game win streak.

The veteran Indians once again emerged as the class of the underachieving AL Central, winning 91 games and finishing 13 games up on second-place Minnesota, while a youthful Atlanta squad put the brakes on a run of four straight losing seasons to finish atop a weakened NL East with 90 wins.